The first thing that comes to mind when someone says “central Europe in winter” is freezing weather. But it also means relatively few crowds, great winter sports & attractions, cheap hotel rates and a different kind of romantic. I bravely took this trip from 29th December 2011 to the 11th of January 2012. I had just about enough time to get a feel of the region and so it was an action-packed itinerary. I covered all the highlights of the cities I visited. Here is our city list: 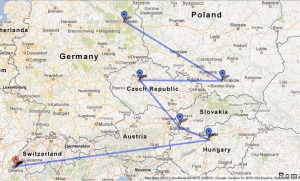 Count down to my next adventure

Where Am I now?